In the comments section of this article from the Irate Gamer Sucks blog, http://irategamersucks.blogspot.com/2015/07/toys-pixar-and-cameras-for-paranoid.html , a discussion came up about Chris Bores (a.k.a. Irate Gamer) unfriending Larry Bundy Jr. (a.k.a. Guru Larry) on social media, when someone claimed that Kyle Kallgren (a.k.a. Oancitizen) had blocked Larry and Brad Jones (a.k.a. the Cinema Snob) on social media. 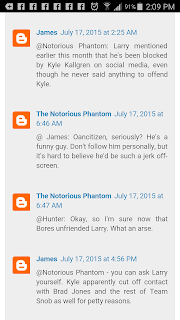 I sent Larry a private message on Facebook about this, and this was his response 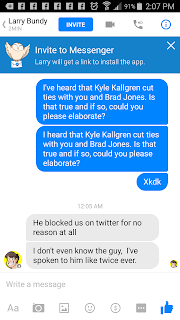 "Kyle blocked a bunch of people and Larry was one of many; his reason was along the lines of "I'm sorry to everyone I just blocked; I just think you are all horrible people with horrible views" (paraphrasing).
Led to a lot of aggressive second-hand name calling from both parties. I won't go into details (not that I know much else), but that's the gist of what happened."
If anyone else can shed more light on this controversy, please do so.
Posted by John Pannozzi at 11:22 AM